How Vitamin Drips Have Changed my Life 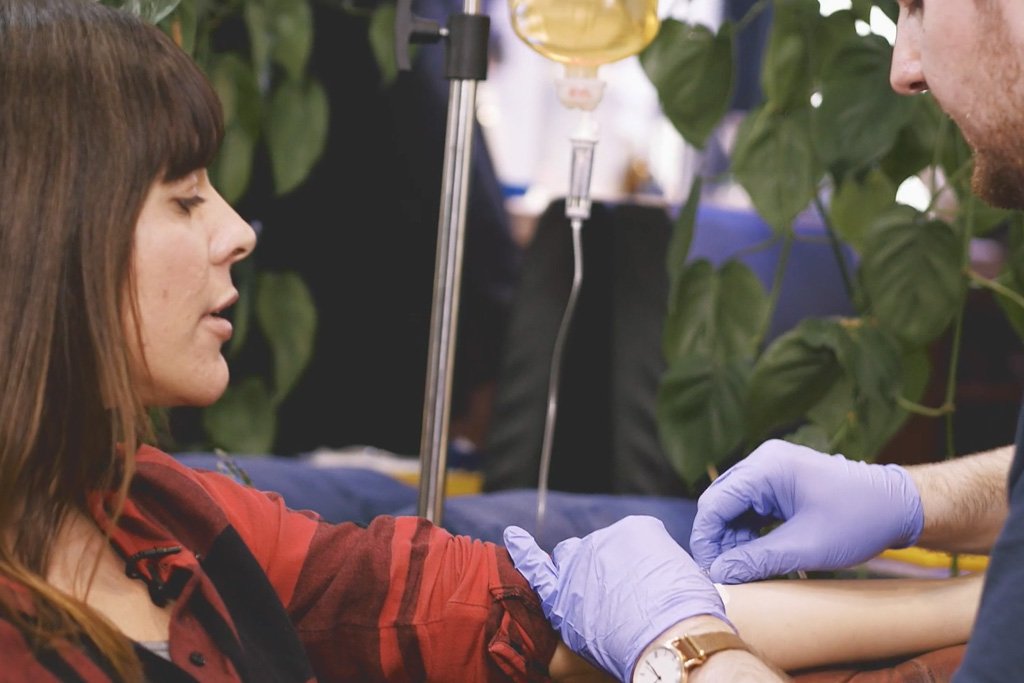 I first discovered Get A Drip when I was at a Halloween party and seeing vampires, ghouls and zombies hooked up to IV drips was quite a blood curdling and comical sight! I was intrigued and took a card. A few days later I decided to book a treatment as my dentist had actually recommend intravenous injections to me a few months back so I thought it must be kismet.

I went the next week and arrived at their mobile clinic and was greeted by the founder Richard and his lovely team. From the outside you couldn’t have imagined how much fit inside; there were about 6 luxurious cream massage chairs, and cupboards full of equipment. Bright white with their blue branding, sterile in cleanliness but the vibe could not have been cosier; it was so different to any other type of health clinic, really tranquil yet edgy! It was the coolest clinic I had ever seen.

I was so inspired by Richard’s story after learning that he had Type 1 Diabetes and how IV injections had improved his health so much that he was motivated to creating his company. Having an autoimmune condition myself I was excited and hopeful.  Richard told me how he had been working on this project for about 5 years with medical practitioners and had clearly poured his heart and soul into this innovative business and, knowing how authentic his mission was and how much research and preparation went into it, I felt instant trust.

Fast forward to 14 months later and I can honestly say IV vitamins have revolutionised my life. I have been going 1-2 times every month without fail and this is why.

For about 10 years I had a sun allergy which was getting worse every year and when I started treatment I hadn’t been on holiday for 4 years and I couldn’t even go out in the sun in the UK as I was just too sensitive.  My last holiday was in Thailand in 2014 looking after rescue dogs at a shelter and my skin was so badly affected that I was on antibiotics for almost 6 months.  It was so depressing and completely ruined my trip and when I returned to London I felt utterly trapped as I felt doomed to never escape to sunnier climates again.

It affected my health physically because of the serious lack of vitamin D and mentally because I had started to develop a strange dual paradox of emotions in the summer; happiness when the sun was out but extremely fearful and anxious of being in it. I had always had skin issues due to my condition but sun and humidity had become a vicious enemy.

I spent a fortune on dermatologists, LED light therapy, every kind of facial imaginable; I took every supplement, powder, tonic, lotion, potion and elixir. I became vegan 6 years ago which transformed my health on so many levels as having spent half my life in hospital on various medications with dangerous side effects I decided to try my own method of holistic healing. I began with nutrition and chemical free products as I realised that a plant based, sugar free diet was the first lock of change that I had opened.

I started having glutathione at Get A Drip regularly and it transformed my world, and if emotions could be colours it went from monochrome to technicolour.  My skin cleared up so fast and it became better than it had ever been, I literally couldn’t believe it. A few months went by and it was just continuously improving. People complimented me, told me I was glowing and that I appeared happier and more energetic. One day I pondered to myself, shall I try and take the ultimate test and go on holiday again to Thailand to look after rescue dogs? It was a giant leap of faith because of what happened to me before but I decided, feel the fear and do it anyway and off I went on New Year’s Eve  2018.

I spent a month walking dogs in 40 degree heat every day from 9am to 5pm and my skin was CLEAR! I’ve had 2 more holidays since then in blazing hot countries and not had a single outbreak since. I feel like I’ve been given keys to the globe because of Get A Drip. Having such a debilitating condition for so many years I finally found the missing link to everything else that I was already doing to advance my health. This was the game changer!

Glutathione is referred to as a master antioxidant which is a combination of three building blocks of protein or amino acids − cysteine, glycine, and glutamine which are critical for immune function and controlling inflammation. Glutathione protects our cells and keeps our immune system healthy but if our body doesn’t make enough or uses it all up too quickly it can have a knock on effect on our immunity.

What I realised is and learned through research was that even though I was eating super healthily, it was about how many nutrients your body absorbs and stress levels seriously depletes your health and nutrient storage, so by having them filtered directly into your bloodstream bypassing your digestive system,100% of the vitamins are available for the body to use. I now only take a few herbs, I don’t have skin treatments and I don’t go to any medical or even holistic therapists. All the money I used to spend on such a plethora of activities and purchases have been completely streamlined. I eat a healthy whole foods diet and get my vitamin infusions.

I’ve pretty much made my way through the whole menu at Get A Drip and have whatever I feel I need at that time but the ones I have regularly are vitamin C, vitamin D, B complex, selenium which works as powerhouse with glutathione and B12.

The bespoke drips are just amazing and so personalised! They have created genius drip syntheses for any health issue you have from energy drip to fitness to fat burner, fertility and anti-ageing and more.

You really will not find a more positive and fun energy anywhere else as Get A Drip has built a new clinic culture, almost like the disruptive companies of what Airbnb became to hotels and what Uber became to taxis. Half the time people don’t realise Get A Drip is a clinic with the stylish furnishings, beautiful hanging plants, and bright neon signs, it’s a sensory overload, serene yet revitalising. I see people drawn to the place just to discover what they do. One of the greatest things is that you can get an appointment whenever you want, they are so flexible, helpful and knowledgeable and Richard is so hands on.

I can’t endorse Get A Drip enough and I do, to anyone and everyone wherever I am in the world and those that go on my recommendation all feel wonderful after too; to concur, your health upgrade begins here.

Visit Our Shop Book an Appointment